Why is 'density' the new buzzword in precision ag?

When it comes to the return-on-investment for precision technologies, “where” can be as important as “what!”

If you have been talking with anyone from Servi-Tech Expanded Premium Services (STEPS) lately, you may have noticed us using the word “density” a lot. What we are describing is a strategy to squeeze the most value out of technologies like aerial imagery and soil moisture sensors, so we can deliver the best insights about their crops at a price that can be easily recouped. In this article, I will explain why the placement of our services are so important for maximizing the value that our customers get out of aerial imagery and soil moisture sensors, and how it paves the way for more exciting things to come.

There are a few different strategies to collecting aerial imagery. Some providers fly ultralight aircraft as low as about a thousand feet and make multiple passes over a field in a method that is not very different than how UAVs are used to map a field. On the other end of the scale, some providers fly much larger twin-engine aircraft at 28,000 feet and use huge cameras cut into the hull of the plane to capture the imagery. Servi-Tech’s aerial provider, TerrAvion, is somewhere in the middle. They capture about a mile swath as they fly over fields.

Distance is money, when it comes to collecting aerial imagery. The further you have to fly between fields, the more hours you have to pay for the pilot and the more fuel and maintenance you have to pay for the plane. If you connect the dots between fields with a mile-wide paintbrush, you quickly realize just how many fields are being flown along the way! No one is using (or paying for) that imagery, though, so it is effectively going to waste. When we sign up multiple fields that are close to each other for aerial imagery, it doesn’t cost much more to collect than if we had signed up a single field that the pilot had to go out of their way to visit. 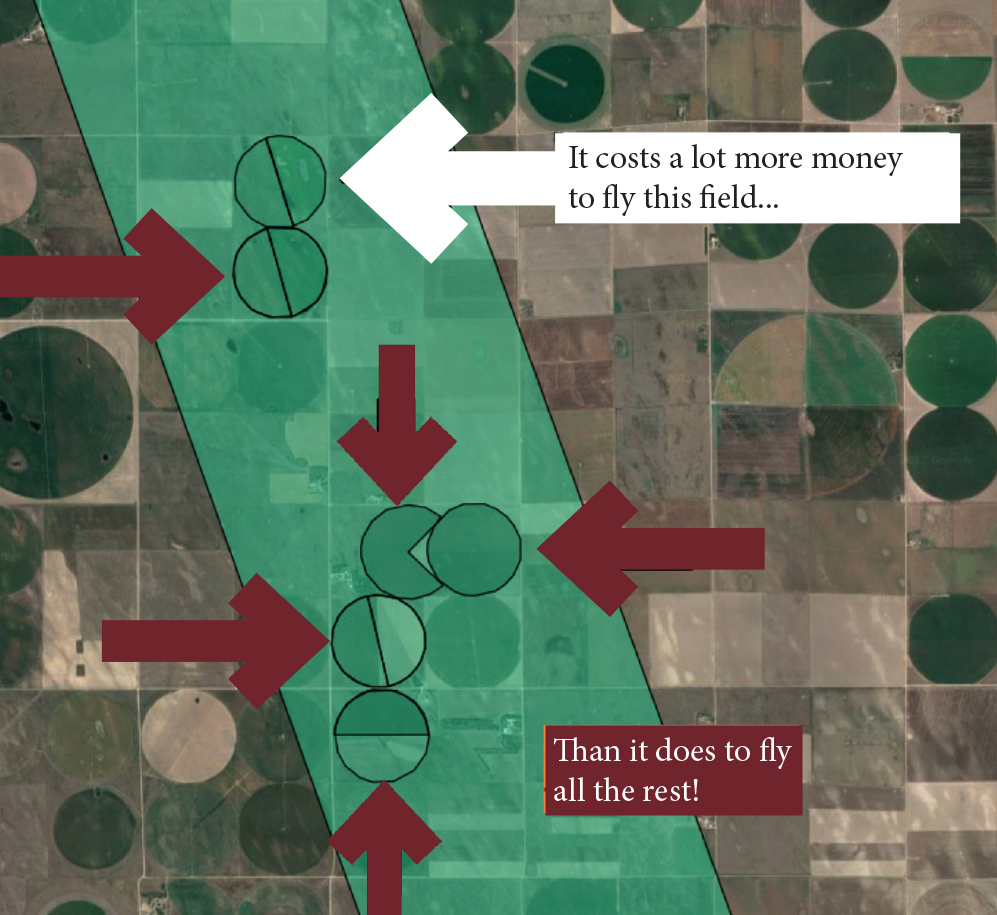 The image above shows how many fields are being captured by a single pass of the aircraft.

It’s a nice thing to save the pilot fuel by consolidating our aerial imagery acres, but what’s in it for the grower? To keep a simple and consistent price for the grower, we aren’t going to be asking them to pay different amounts from county to county. There are two different ways that we can pass along a better offering to the grower in the long term, however. We can obviously pass along a better value by lowering  the price of the service, but another way is to keep the price the same while increasing the frequency of flights and the improving the resolution of the imagery. What this means is that the more acres of aerial imagery, the better offering it will be for everyone!

I hope that it makes a lot of intuitive sense as far as the density of fields affecting the value of aerial imagery. But what about soil moisture sensors? The old version of TheProfiler used a separate cellular modem at each soil moisture location in order to move the data from the field and onto our servers. This was the best technology at the time, but now there are ways to do things much more efficiently.

With TheProfiler Plus, the soil stations use a medium-range radio to report back to a nearby gateway, which is mounted on a pivot, grain bin, or other structure. These low power LoRa radios are able to communicate for several miles, with perfect line-of-sight, and can still send a reliable signal up to a mile away when located under the canopy of corn. The integration device, (the little gray box that the moisture sensors plug in to) runs on two AA batteries for an entire season. The gateway can serve many soil stations, which reduces hardware costs and cellular fees.

Just how much lower is the cost with a gateway/soil station type setup? It all depends on the number of soil stations per gateway! The closer together we are able to place the soil stations, the fewer gateways we need to service them, reducing labor and hardware needs. 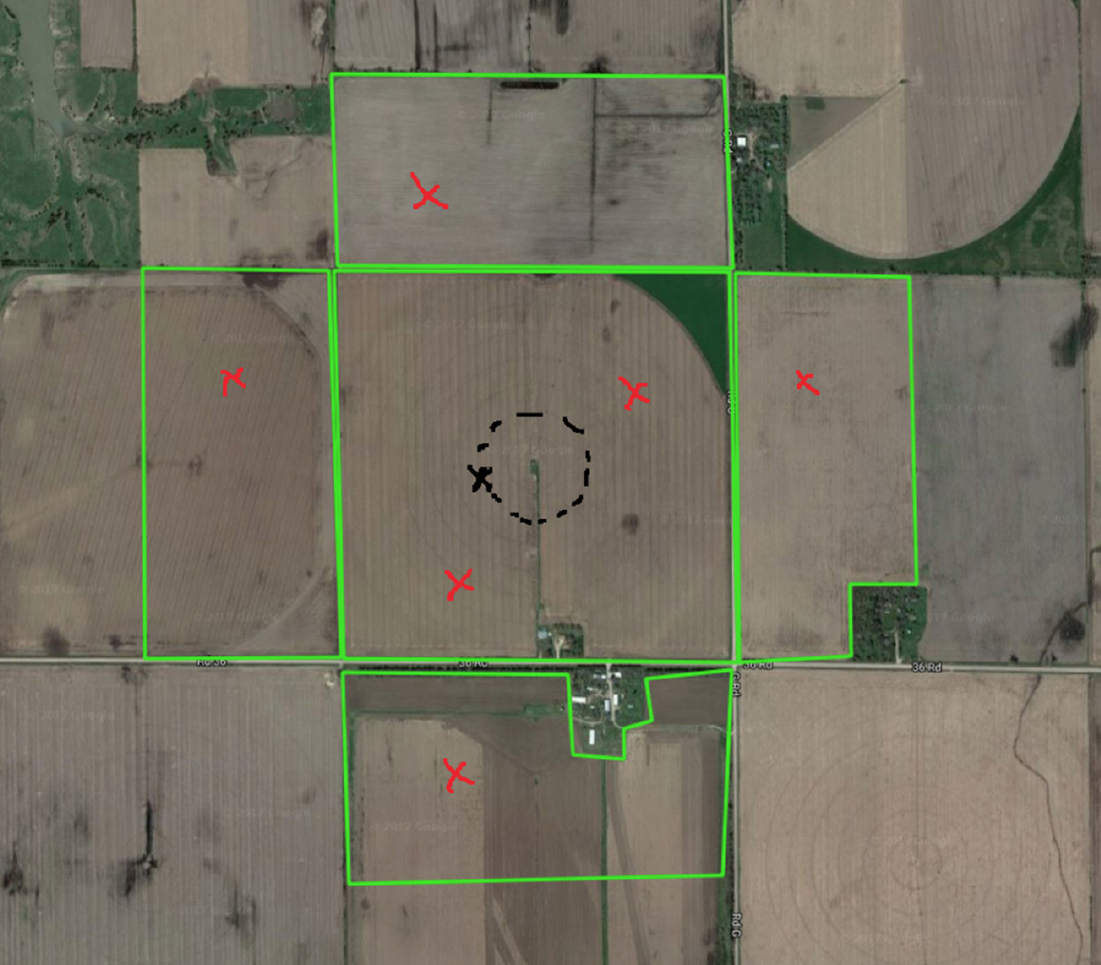 All six of these Soil Stations (marked by the red X) can be served by a single gateway on the pivot.

TheProfiler Plus network isn’t going to stop at soil moisture stations, though. Tank level monitoring, pivot and well diagnostics, in-field weather, and more are being developed at this time to work on the same LoRa radio network. It’s a good thing that the gateways can each handle the traffic from hundreds of individual devices, because the options for field-monitoring and equipment-monitoring sensors are going to greatly expand in the coming years.

As these options for in-field sensors increase, STEPS will continue to develop our website and app to keep this information at the fingertips of our agronomists and growers, but without overwhelming them with unmanageable amounts of information. The ideal outcome with any of these sensors is that the grower is given timely, actionable advice, rather than a flood of raw data.

To summarize: the density of our aerial imagery and soil moisture monitoring in 2018 is going to play a big part in our ability to continue to improve both the quality and value of those services in future years. By lowering the cost of collecting imagery and reducing the amount of hardware and labor involved with in-field sensors, we will be able to offer better services, at better prices, year after year.